As you may have read, I made some fudge from the new Divvies Bakery Cookbook. I made a mint batch, a bacon batch and a candied bacon batch. My book editor, who had a chance to taste all three, called the candied bacon fudge: “man-catching”. It was really stellar. And super easy. Actually, It was the ease of the fudge recipe called out to the mini-chef in me to play. I told Lori of Divvies about my happy fudgey experience and she suggested opening up a contest to let to everyone reading this come up with some fun recipe ideas and win some chocolate. So, in conjunction with Divvies I’m running fabulous fudge flavor recipe contest.

Submit your email and your recipe to Divvies at this link. There’s a space to put a message after you enter your email, that’s where you should submit. 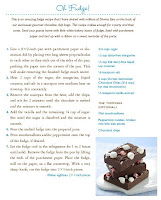 (From The Divvies Bakery Cookbook by Lori Sandler. Copyright (c) 2010 by the author and reprinted by permission of St. Martin's Press, LLC.)

The entries will be judged by me and Lori.

The winner will be announced after Labor day.