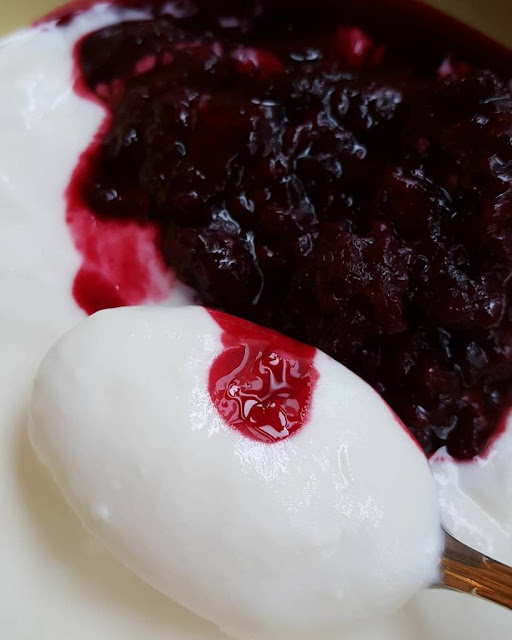 UPDATE: Here another method, very similar, via Food52.
UPDATE: I've been straining my results, WOW! Strained = Greek yogurt or even Labneh. So good!

I saw this recipe in the New York Times food section a year ago (February 2016) and it’s taken until now (February 2017)to make it. Don’t you wait that long to try this out. I’m a yogurt fan, I usually have a portion as a mid-morning snack. I also make quick jams often as swirl-ins. But making yogurt from scratch? Don’t you need a machine? Or special equipment? Nope and nope. Just this genius recipe from Melissa Clark and the New York Times.

As Melissa says: “…I found the most accessible and complete guide in a book called “Yogurt Culture,” by Cheryl Sternman Rule, published last year. Her book made homemade yogurt seem not only easy, but also kind of essential. She persuaded me that making my own yogurt was one of those techniques that, like baking bread, every passionate cook should try at least once — if for nothing more than to connect with an ancient tradition.”

Some recipe notes: I adapted the recipe slightly for my amount needs (4 cups not 8 cups) and lactose intolerance needs (I used Lactaid milk) and what yogurt I had on hand (Dannon Plain Whole Milk yogurt). I was concerned about the keeping it warm in an off oven with just the light. The NYT help line said this: “For this recipe, 'warm' means anything above 70 degrees, which can usually be achieved on top of the fridge. If you're not sure, take a quick check around the house with a digital kitchen thermometer for a good spot.” Melissa Clark on Twitter also wrote to me suggesting that I preheat the oven to 200 degrees and then turn if off and put the yogurt in, if I was concerned about warmth. I tried the completely off oven with the light on for 8 hours (one batch) and 10 hours (another batch). Both were perfection.

In future, I might try with whole Lactaid milk and might try straining it. But for my first try out of the gate, this works!  NB: Cheryl Sternman Rule has some options for non-dairy options on her site.

In a heavy pot add milk and bring to a bare simmer, until bubbles form around the edges (190 to 200 degrees), stirring occasionally as it heats. Remove pot from heat and let cool until it feels pleasantly warm when you stick your pinkie in the milk for 10 seconds, (110 to 115 degrees). Transfer 1/2 cup of warm milk into a Pyrex measuring cup with spout and whisk in ½ cup yogurt until smooth. Stir yogurt-milk mixture back into remaining pot of warm milk. Cover pot with a large lid, wrap it in a kitchen or tea towel and move to your off oven with the oven light turned on. Let yogurt sit on the off oven for 8 hours, have a peek at 8 hours. It should have thickened, and smell like yogurt. (I left one batch in for 8 hours and another for 10 hours. Both were yum.) Transferred the pot to the refrigerator and chill for at least another 4 hours as it continues to thicken. Decant into clean Tupperware and use, all the time! Stir in your favorite mix-ins and enjoy!

Join me on Instagram @allergicgirlnyc and on my Facebook feed to see what I'm cooking right now and to cook allergen-friendly with me!