I wanted the brisket.

I've been thinking about it, having a sense memory of it. I'd even invoked a quasi-Proustian experience of it: tender, perfectly seasoned, never dry, not fatty—it was an exceptional brisket and I’ve been waiting for two years to enjoy it once more.

So, I asked the waitress how the brisket was on Christmas Eve day.

“Hmm. May I have a taste of the brisket, please?”

She did not look happy. She replied, “They’re real busy up there, they may not do it. But I’ll ask.”

If you’ve ever been into a real Jewish deli, you know this is a customary request. Often at the old Second Avenue Deli, the waiter/waitress or counter person would ask if you’d want a taste of whatever you were considering. Now that I think of it, counter men often just handed out tastes, it’s good business: it gets the customer excited about the product, it shows that the deli is proud of their product and a free taste makes even the grumpiest customer happy.

Similarly native New Yorker and equally Deli loving, Bo Young, my lunch companion, and I looked at each other. This wasn’t the waitress of the old Second Avenue Deli. I mean there’s funny-surly-server as in “you’re a colorful character” and then there’s less-funny-harried-sever who makes you think they're doing you a favor, as in, "I can’t be bothered.”

True, on Christmas Eve day, when Bo Young and I made the pilgrimage, the first of many I hope, we waited online for 30 minutes; the tables were jammed; the bus boys looked like this was their first time busing; and the health salad and pickles that come gratis had to be requested, twice. Shonde I know. Still, we persevered.

And the waitress brought me a taste. Yay. Here it is after we gobbled most of it down. 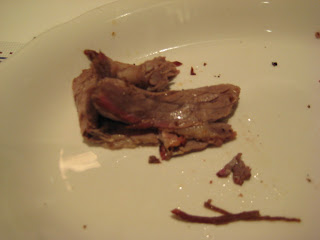 She was right, it wasn't great; I ordered the pastrami.

So the food, the food! I know, you’re dying to know. I was too. Especially after all the recent press: The New York Times, New York Magazine and its blog, Grub Street, Save the Deli, The Jewish Week. Oy, they've all weighed in.

Let me say this first and foremost: It’s been open a week. One week. If I’m going to rekindle this deli love affair I think, to be fair, I need to give them time to get on their feet. However, if you’re reading between the lines then you’d be right, it wasn’t exactly as I remembered.

This brisket on Christmas Eve day 2007 was not the brisket of my memory which was Christmas December 2005, days before its unexpected closure. It wasn’t bad, in fact it was quite edible. However, both Bo Young and I found it dry, and bland. It didn’t glisten. It didn’t melt.

But we didn’t give up.

I had the half soup and sammy. My soup was chicken consume with rice and carrots. It wasn't as day-glo yellow as its predecessor; the beloved dillweed was scant in flavor as was the chicken flavor, and it too was bland: 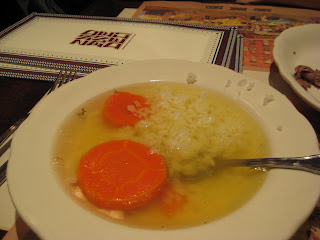 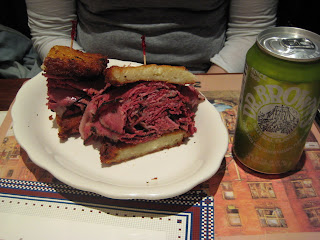 I had a half pastrami sammy. We both thought the pastrami was tasty but our cuts were the crumbled ends and overly fatty. There’s great pastrami fat and then there’s just fat fat.

The health salad, my precious, was pretty good, the cabbage fresh and sliced thin, sweet and vinegary, but again not oh-my-god-I’ve-been-transported-back-in-time-great. 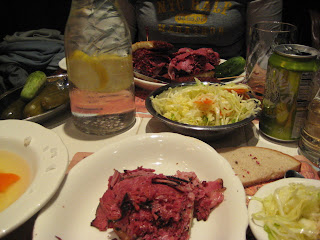 And here's the bill, speaking of coronaries. 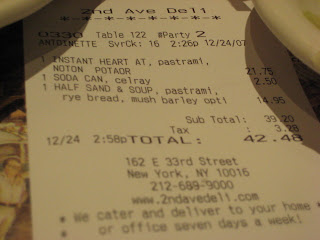 The upshot? When the lines have died down, the service will be less harried and confused; when the cuts become more flavorful and the seasonings adjusted, I shall happily return and reevaluate.

Bo said…
Good summary of the visit but I think you're being generous to our waitress. I'm up for a revisit once the craziness dies down.
12:34 PM, December 25, 2007

Harrice Miller Entertainment said…
Hold on here, $2.50 for a can of soda and $21.75 for a sandwich (including the heart attack and surly waitress)??

Last week I was having a manicure at the nail salon that happens to be next door to the Second Avenue Deli and the line from the deli was just in front of the windows where the nail drying machines are. There was Bob Saget in a baseball cap with a small entourage at the end of the line.

Buzzes and giggles were accompanied by the sound of phone camera snaps from the wet nails crowd and all of a sudden the owner (I'm guessing) came out and took Bob and his peeps right inside.

About half a dozen people in line looked upset and walked away, while others waited patiently, munching on little chopped liver on rye snacks brought out by the cashier (I remember her from the old SAD).

The only good thing so far is that the sandwiches are big enough for two at-home meals plus the one at the deli. Yes, I'll try it too and luckily, even though it's only a block away from where I live, the lines, the inflated prices, the untrained servers and the calorie/fat count will keep me from going there very often!
12:59 PM, December 25, 2007

Allergic Girl® said…
i had some takeout from there today, hoping maybe they've tweaked since last week and b/c i'm under the weather. the 2nd ave deli's chicken soup always made me feel much better.

the health salad is yummy and pretty on target with the prior incarnation.

but, the soup, the soup is tasteless. there is no bubby back there overseeing the stuff, otherwise she would never let it out of the kitchen to be served. sigh. really nicht gut, i hope it improves.
9:09 PM, December 30, 2007