I started an elimination diet in May 2005, almost four years ago--jeez. It was for massive stomach disturbances. It took two full years for my stomach to come back to anything even close to normal. Two years of not cheating, ever. And almost two years after that I’m still on it because it works and my tum is still not 100%.

But I’ve gotten curious as I’ve gotten better. Which one of the foods that I eliminated [dairy, wheat, soy, processed sugar] is the true food intolerance culprit that keeps my stomach roiling, knowing full well that it could be all?

Soy has been a big question. I was a full-on veggie for 17 years without any soy issues. So why all of a sudden would soy be problematic? I cut it out with everything else but a few months back I tried Jo-sef’s GF cookies. Soy flour is a major component and after sampling (read: gobbling down) too many samples, my stomach said soy flour was seriously no good.

OK, but what about soy lethicin? No issues there that I've noticed in any of the GF cookie samples I've tried like Home Free.

And this past weekend at a private WFD Family event, the restaurant made us CBK cupcakes with vegan margarine, Earth Balance: the major ingredient of which is soy.

The cupcakes looked soooo good that I thought, ok here is a real test. Lemme try this icing made with soy marg, rice milk and CBK frosting mix—worse I have a tummy ache Monday but at least I’ll know. 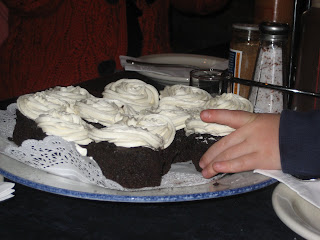 And guess what. Nada, nothing, not one tummy rumble. So soy marg is ok. Soy flour is still a “wha?” as in I’m going to stay away.

The Kosher Cupcake said…
There is something about the way Soy Flour is created and processed that causes issues for people. While it is a supposedly gluten-free flour, a lot of gluten-free people have a reaction to it as well.
12:00 PM, February 12, 2009

Amie said…
I have the same issue with soy flour = bad, but no issues at all with soy lethicin. I can't do soy milk either.

Twisted Cinderella said…
Good to know about the soy flour. I am newly gluten free and I will keep an eye on my reaction to it.
6:46 PM, February 12, 2009

ByTheBay said…
Bean flours, including garbanzo and soy flour, cause problems for many people who are not allergic to soy or to garbanzo (etc). As mentioned above, it has something to do with the processing or the beans not actually being fully cooked via boiling, or something like that. It is fairly typical of people with tummy troubles including IBS and Celiac Disease. Do you have trouble eating something like socca or pakora that are made with garbanzo flour? And could it be a quantity thing? (You mentioned eating a lot of Jos-ef's cookies)
9:37 PM, February 12, 2009

Alisa said…
Yah for soy marg! My husband gets tummy troubles from soy flour, soymilk, and tofu, and he doesn't have any known food allergies. I have heard that in general the proteins can be hard to digest in those forms.
12:13 AM, February 13, 2009

Allergic Girl® said…
thanks everyone. didn't know this was so common. am really feeling less alone in all this soy business.

To BTB: no problems with garbanzo overall, havent had alot of products with garbanzo flour though and yes it could have gobbled too many cookies!
7:24 AM, February 13, 2009

Anonymous said…
Hi! I had a question for you. I am allergic to soy, rice, fish, peanuts, orchard fruit, and tomatos. I heading to NYC for the day this weekend and I'm trying to find a place where I can eat. I don't know where to look! Do you have any ideas?
-Victoria
4:01 PM, March 12, 2009