An elevation, a surprise, a little something different - that’s exactly what this recipe delivers.

Easy Cinnamon Chocolate Cake with Chocolate Buttercream is a gloriously chocolatey chocolate cupcake with buttercream and when you bite into its lusciousness, you think: “Hmm, there’s something else in there, some flavor, some note that is familiar and yet I’m seeing it anew. Cinnamon!”

Cinnamon adds a touch of warmth, a soupcon of elegance, a hint of the exotic and drives the chocolate train just a little off course, to a new adventure in deliciousness.

This cake will charm your loved ones for Valentine’s Day and will delight *you* if you’re having a self-love V-day. Below are my recipes notes and recipe.

This recipe is free from: gluten, wheat, fish, shellfish, peanuts, tree nuts. Betty Crocker Devil’s Food Cake may have soy.  I use cow’s milk and butter.

I used Enjoy Life Foods Mega Chunks in the cake batter to make this a triple chocolate cake situation. Oh my! I threw in two handfuls and it was the right amount for me. Add as many or as little as you like. Enjoy Life Foods mini-chips would be perfect in this batter, too!

I used Betty Crocker Devil’s Food Cake. These are the ingredients and the directions as of February 2018. 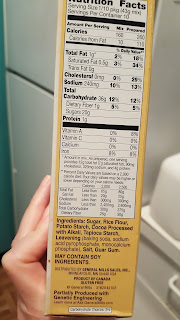 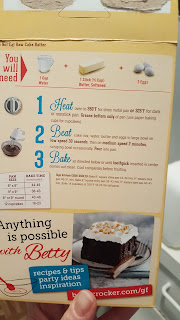 I made cupcakes. I like cupcakes because it’s easier to transport and share, they are great portion control and I can frost to individual tastes, too. I made 16 cupcakes out of one mix; it says 12, I got 16. Go figure. No complaints here.

Beat butter in medium bowl. Add cocoa and powdered sugar alternately with milk; beat to spreading consistency (additional milk may be needed). Blend in vanilla. Yields about 2 cups frosting. Set that aside.

Betty Crocker Devil’s Food Cake
(Bake according to directions on the box, reprinted below)

Preheat oven to 350 degrees. If using, line cupcake pan with liners. Beat butter, eggs, water, cinnamon and cake mix in a large bowl with a hand-mixer for 30 seconds, then on medium speed for 2 minutes. Using a 1/4 cup measuring cup, pour batter into cupcakes pan. bake for 18 minutes or until knife comes out clean. Let cool completely and then frost generously.