This is one of those GF places mentioned in both the Gluten-Free New York Times article and by many GF bloggers here in NYC. I had never been until a few weeks back when Ms. Bay and I had breakfast there [Hey Ms. Bay!].

I don’t frequent GF restos regularly because my feeling is that just because you’re a GF resto doesn’t mean you’re necessarily allergy-friendly. During my decades as a vegetarian I found veggie restos were NOT friendly to my nut allergies at all, just the opposite: nut loaf seemed to be a staple. I may have to amend this as the two out of three GF restos I’ve been to have been VERY accommodating to my allergies [Peter’s, Sambuca were great. Risotteria, the waiter was totally befuddled and actually pitied me. Out loud. Never a good sign.]

Back to Peter's Gourmet Diner & Bar. They have a typical extensive diner menu with most items available as a gluten-free option. How cool is that? It’s also a new breed of diner: white tablecloth diner dining. A bit over the top but hey it’s serves gluten-free bread with eggs, Sterk’s bread to be precise.

I’ve been there twice now and just had eggs and toast but after over 2.5 years of NOT being able to utter that phrase, I was pretty happy to do so. Here’s a pic with grilled chicken on mesclun salad in the background. 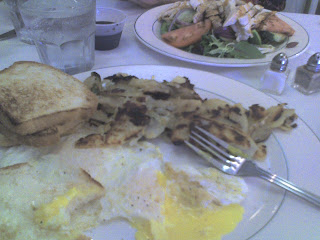 I wouldn’t necessarily go out of my way to dine there, so not my ‘hood, but if I’m in the nabe and want solid diner-fare, Peter’s is on my list.

i still want those pancakes, dammit. maybe one day. not sure i'd make a pilgrimage to the upper east side just for pancakes i could make at home, but if i end up in that neighborhood again some time i will try again :)
8:15 PM, October 13, 2007