Udi's gluten-free line in now produced in a facility that processes tree nuts. From the VP of GF: "When we moved into our new shared facility, we began to share space with our granola production. They use various tree nuts in their production. Although we don't share any equipment between either production, we are adding this label until we get new bags designed with the declaration included."

I did a quick three hour zoom through the Fancy Food 2009 show, which was pretty impressive (read: exhuastering) as there were over 5000 stalls of food glorious food.

While at the show I met Eric of Udi’s Foods based in Denver. After the show he sent me some gluten-free samples to try: white bread, two pizza shells and two types of muffins, blueberry and lemon crumb.

Here’s a money shot of the GF treats: 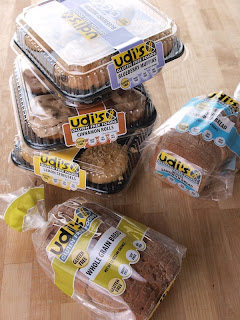 All of the GF products are, according to Eric, gluten free, dairy free, soy free, and nut free. I asked him for more info.

Eric says that, “...because Udi's Gluten Free line is produced in a facility and on equipment that is just used for gluten free production, there would be no contamination from nuts or dairy or soy.” (Note: they have nuts in a different production line in a different facility).

I twittered about Udi's Gluten Free white bread from the show, because it was actually squishy. I know, GF soft bread, crazy man. Once I got my hands on the samples I must admit I finished one load in about two days. Sampling is hard work and the simple joy of bread and butter cannot be underestimated.

(And yes I know so many fabulous bakers out there make your own GF bread so you have it all the time. Yay you! With nut allergies, it’s just that bit more difficult to find completely uncontaminated GF flour.)

As for the muffins they tasted commercial - I mean that in the best sense as in almost indistinguishable from the glutened kind. To wit: I shared two muffins of each kind with a friend who is gluten intolerant but her man is not. She took them to her home to try them. He ate them first and insisted they were filled with regular flour and that I must have made a mistake and to call me right away to check. (BTW: My home is gluten-free. I don’t regularly keep foodstuffs that have wheat or nuts. Even samples). My friend called and I read the ingredients to them both and they were both tickled, gluten-free.

Udi's Gluten Free GF muffins passed the non-GF eater test with flying colors and their white bread was squishy. And they're all manufactured in a dedicated GF facility that is also soy, diary and nut free. Thanks Udi's Gluten Free and Eric for such a yummy product.

Unknown said…
Thank you Allergic Girl for this great review of the Udi's Gluten Free line! We've been at this gluten free thing for less the 1-year now and the response from folks has been both humbling and fantastic at the same time. Our Head Baker has even received marriage proposals from women who are just crazy about his GF creations.

We're working on bringing the Udi's Gluten Free line to stores across the country, so keep an eye out for it. In the meantime, you can always email us at: glutenfree@udisfood.com to place an order. Stay tuned for an online store coming soon to our website: www.udisfood.com/glutenfree.php.

Amy Green said…
Thanks for the review. I had to giggle when you commented about those that bake bread. There is so much I can't eat, though I don't say it, I often feel that way when someone says they do such and such. I've just learned to go without. :) It's neat, though, to see that the market is swinging our way.
7:04 PM, July 16, 2009

anonymous said…
I purchased this white sandwich bread yesterday at King Sooper in Monument and am close to tears today. I ate 6 slices this morning. I've tried every brand of bread out there, and this is mind blowing. I'm going back for a few more loaves, hope they are there.The crust is crusty, the inside is soft and it stays soft!It even smells "real".Am here for the summer, hope to take a freezer load back home. Perhaps in the future they will sell the bread mix on-line that you can bake at home.
1:41 PM, July 24, 2009