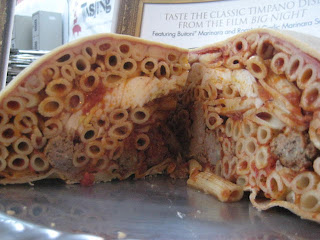 Did something that felt New York-y last night: went to see an outdoor movie, at the South Street Seaport, in the fog and the rain, with a crowd of film goers, foodies and foreigners. It was the penultimate night of the third annual NYC Food Film Festival.

We all watched Big Night (sponsored by Buitoni). Remember that little jewel of an indie? Co-written and co-directed by Stanely Tucci, this poem about Italians and Italian food in the 1950s was the ideal treat after a long day at the office (er, where I write and think about food). The audience laughed more this time around than I remember when I saw it originally in theaters. It felt like a cozy drive-in or what I imagine that would be like. Here are some atmos shots of the new Water Taxi Beach at Pier 17. 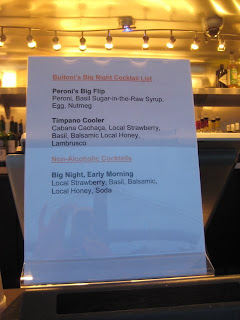 An "installation" at the end of Water Taxi Beach 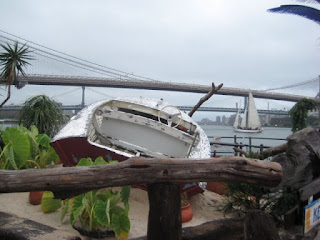 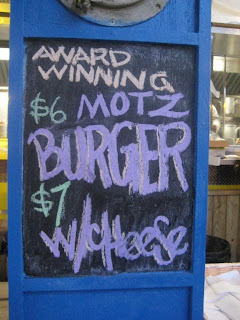 Here’s the plot of Big night from Wikipedia. Here's Secundo trying to get 1950s patrons to understand the concept of risotto. Here the same scene translated into Italian. Brill! Here are some of the best lines in the movie by Pascal, the brothers’ perceived main rival for business.

“Bite your teeth into the ass of life”

“Give the people what they want, then give them what you want.”

The NYC Food Film Festival partnered with the NYC Food Bank to have a collection post for canned goods. I brought in over half a dozen cans that I discovered after starting a version of “eating down my fridge” (and pantry and freezer) last week through reading Kim O’Donnel’s tweets (@kimodonnel).

There’s one more night of the NYC Food Film Festival left, the movies are free and the last night movie is about Peeps, sweet Peeps.
Email Post
Labels: culture nyc

Jenny said…
I LOVE Big Night--looks like you had a really fun evening. Chicago has done a similar food/movie thing--once for an entire week. I love stuff like this--and also that you can participate with food allergies. Of course you can!