I talked about making a gluten-free, low-lactose kugel last week. I ended up making two kugels simultaneously. Making the low allergen one first then the “regular” one. The GF/low-lactose kugel had the below recipe substitutions, I bet you could continue to play with rice milk, soy milk, almond milk or hemp milk, coconut yogurt or soy yogurt even. I had low to no tummy troubles post indulging (yay) and the kugel was definitely edible.

Some notes if you're going to try this: it should be eaten the day it’s made. The day after, when it was finally served, the custard was truly all absorbed so it wasn’t as smooth as when it came out of the oven; it tasted more like sweet, cold lasagna. Not unpleasant, just dense and a little drier than I would have liked. When I do it next time, I’ll use slightly fewer noodles, a bit more raisins sprinkled once on the bottom and once after the custard is poured in and I will make it the day we’re eating it. Other than that, for a first attempt, not too shabby.

***
The beginning of my mise en place: 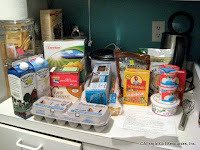 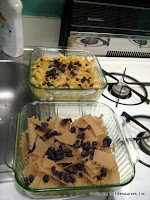 Can you tell which is which? 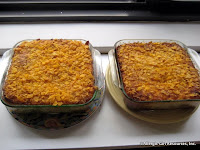 My third taste of the warm GF/low-lactose kugel: 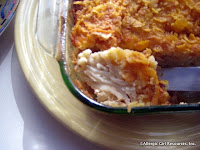