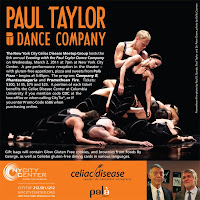 Friend and colleague Erin of Gluten-Free Fun let me know about this year's Paul Taylor fund raiser for celiac disease. I can't be there this year but check it out!

The New York City Celiac Disease Meetup Group is very excited to host the 6th annual Evening with the Paul Taylor Dance Company on Wednesday, March 2, 2011 at 7pm at New York City Center. A pre-performance reception in the theater -- with gluten-free appetizers, pizza, and sweets from Pala Pizza -- begins at 5:45pm.

Gift bags will be given to all reception attendees. The gift bags will contain Glow Gluten Free cookies, brownies from Foods by George and Celiebo gluten-free dining cards in various languages. More exciting donations to be announced.

The program: Company B, Phantasmagoria, and Promethean Fire.

Tickets: $300, $135, $75, and $25. A portion of each ticket benefits the Celiac Disease Center at Columbia University if you mention code CDC at the box office or when calling CityTix, or if you enter promo code 6586 when purchasing online.

A pre-performance reception catered by Pala Pizza begins at 5:45pm, followed by the 7pm performance. Gift bags will include Glow Gluten Free Cookies, brownies from Foods By George, and Celiebo restaurant wallet cards. Tickets at CityTix (212.581.1212); a portion of each ticket benefits the Celiac Disease Center at Columbia University when you mention code CDC. Photo by dancer Francisco Graciano.

Unknown said…
Thanks for posting. It is really a fantastic event. Tickets start at $25 and this includes gluten-free pizza, beer, a goodie bag of gluten-free treats, and a ticket to an award-winning dance performance. A portion of all ticket sales go towards the Celiac Disese Center at Columbia University. It's a win-win situation.
9:41 AM, February 02, 2011