Last night was dinner with my Foodie Family at CraftSteak.

A few things one should know about my family:
--After 17 years of being a lacto-ovo vegetarian, I am now a meat-eating vegan, which for me means, no processed foods, no wheat, no dairy, no soy, no sugar--all meat, veg and fruit.
--My father and step-mother, after a few years of mega-meat-eating a la Atkins, are now raw-foodists a la David Jubb [minus the urine drinking] and eat only salads, nuts and fruit.
--As a group, my mother, father and step-mother, are very discerning eaters.
--Collectively and separately, we have dined at some of the best restos in town.
--We aren't afraid to send anything back, switch tables, request more or less heat or a/c; in short, we're not shy.
--We compliment and tip well when warranted.
--We tip pretty well even when mediocre because we fully recognize that we are a difficult table.
--We love to laugh and we always have a ball even when the food, frankly, sucks.

This was the case last night with our dinner at Craftsteak.

First a few nice things:
--They TOTALLY took care of me regarding food allergies. I have found this across the board with Tom’s restos and I applaud them for that. Hence I've added Craft to my list.
--The room is spectacular; right at dusk, the sun-shades electronically slid up from the floor-to-high-ceilinged windows and revealed wispy pink clouds over the Hudson River.
--The service, although a bit green, was helpful and sweet-- esp. our Captain.
--The manager, Anthony Mardach, was understanding and patient.
--The parker-house rolls that came out in their own little iron tins I heard were buttery goodness. They looked very yummy. 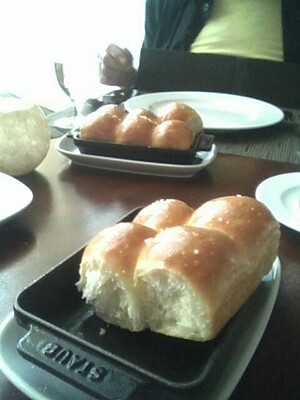 --The Hen of the Woods mushrooms were delightful; we placed a second order.
--The fruit plate dessert was really outstanding, and my half-brother had the make your own sundae, which he said was terrific.
--And the whiskey that the Bourbonnier [as I dubbed the Bourbon sommelier] was appreciated by all as being quite superior.

However, the main purpose of the evening was the steak. Our captain recommended the rib-eye for two that three of us planned on sharing and here is a blurry pic of what arrived. 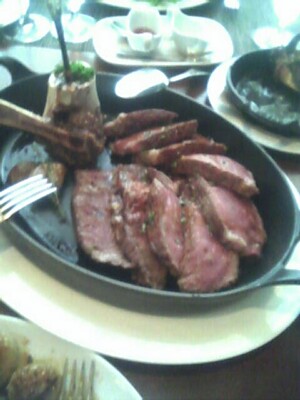 Totally unappetizing. And not rib-eye looking. Nor tasting. We had asked for it cooked medium and so it was sent back because as you can see it was raw. Ew.

Upon its re-arrival, we tasted salty, overly seasoned with thyme [Why?], dense, not properly marbled and tough flesh. Ugh. I ate because by then I was starved; my mother couldn’t stomach it.

The French fries came with a caked-on layer of salt, which made them inedible—those were sent back and returned salt free.

A side dish of sweet corn arrived [I was told only corn, a little butter, salt and pepper was in the dish] inedible because of a heavy hand of salt, again and sent back.

There was a mix-up about getting the right sherry vinagrette salad dressing, or a dinner plate for my Dad, and those two items arrived woefully late.

I have condensed about 45 minutes of missed cues, returned plates, missing items and serious saltiness into a few sentences but I can tell you it wasn’t pleasant and was rather frustrating and amusing.

After the corn debacle, which came out of the kitchen last and after most of the meal was consumed, the manager arrived at the table, bearing some more salad dressing that was still not the sherry vinaigrette and it was too late as the meal was half eaten and half returned.

He was apologetic but firm that this is how the chef cooks his food and if the seasoning wasn’t to our liking that was certainly our prerogative. Our point was seasoning is fine; killing the flavor of meat or corn with salt thus rendering the food inedible was not.

He very graciously took those items off the bill and the kitchen sent out two complimentary fruit plates, which as I mentioned above were perfection!

Alas the meal was not perfection and we had a BIG laugh about the comedy of inedible errors. As the bill arrived and the manager and captain made their sincerest apologies, we felt that they had absolutely taken care of us, and that level of service is to be commended.

Funnily enough, I read this in the Times this morning.

"Mr. Colicchio said the tepid critical reception for the Craftsteak restaurant he opened near the meatpacking district in May “was a wake-up call.”

“I saw that I needed to pay more attention to what I’m doing there,’’ Mr. Colicchio said yesterday on a cell phone from the eighth hole of Liberty National, a golf course near Liberty State Park in New Jersey."

I wouldn’t go back to Craftsteak but I would still go to Gramercy Tavern and the Craft family of restos.
Email Post