Ode To My Pastrami Sandwich

My mother’s first cousin’s daughter had her Bat Mitzvah this summer. The ceremony was catered in a tent in the backyard for what must have been over 200 guests all by Noam Sokolow of Teaneck, NJ. I must admit one of the highlights, aside from Amy's hysterical speech about our Grandma Judy, was the pastrami. Really.

After some research, I discovered that that same caterer has a NYC outpost called Noah’s Ark. I’ve been there at least three times for the delectable Pastrami and haven't been disappointed once. It is both lean and rich; the meat tender and the spices, the perfect mixture. Sometimes pastrami spices can be too perfumy, too overwhelming, and the meat, overly salted: but this pastrami is perfection--just the right balance. Robert, the manager assured me it’s because they start with Romanian spices and they steam it. They could tell me it was Belorussian spices and boiled, I wouldn’t care; truly this is the Ultimate in Pastrami. I mean a WORLD of difference between this and the stuff that passes for pastrami at Katz’s Deli. Katz’s is like the Lender’s version of a bagel—for the masses.

Those in the know go to Noah’s Ark on Grand Street. Ask for Robert, he’s the smiley guy who will seat you. And no, I don’t get a kickback from this blog. But if I did, I’d like it in Pastrami please.

Below are some cheesecake shots of my mother’s lunch: Half pastrami/half corned beef in my mother’s lovely hand—what a combo! 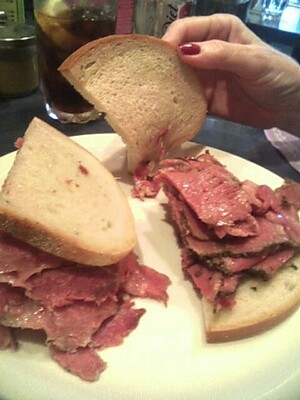 What was left after 10 minutes of serious eating. 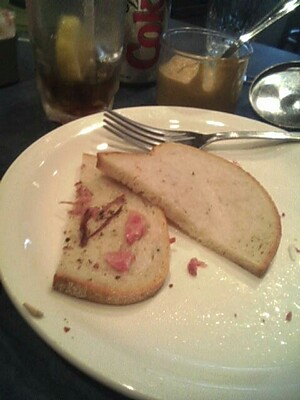 PS: They don't use nuts in anything and NO PEANUT OIL.
Email Post