Have you ever had speck at 10AM? These guys were slicing it up and doling it out. And it’s organic!

The Red Jacket Orchard guy [they’re at the Saturday Green Market ] - his mother is allergic to 30 things, and his girlfriend is allergic as well. Small allergic world.

The EIC of Chocolatier having a tete a tete with the Guittard chocolate boys.

A pastry competition that looks a lot like an outtake from Food Network Pastry Challenge . Lots of tall, whimsical confectionary concoctions, my favorite of which was a chocolate tiki guy. 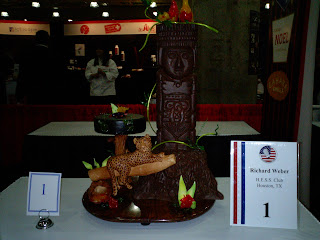 Aisles and aisles of chef uniforms; computers with touch screens for your dinner order; cappuccino/espresso makers; baked goods that don’t appear to be from central processing but they *so* are; lots of soft serve machines, and a whole pizza pavilion, with, I kid you not, some Sopranos types "bada-binging".

Rhythm touch was there-electronic acu-therapy. What they’re doing at this show, I have no idea.

The Mendy’s guys speaking the only Hebrew I would hear all day. Not that I would expect to be hearing alot anyway.

Vinegar drink sound yummy? It was being pushed, I mean offered, in the Japan Pavillion, as well as Green tea drinks, dried fish things, and a lot of pictures of young pretty Japanese girls [both cartoon and real models] drinking cups of something “health” related.

I bumped in the Candle Café folks. Co-owner Joy teaches nutrition at my old grammar school, talk about small world!

And I did my mitzvah for the day, turning in a cell phone I found in the bathroom stalls to security. I hope they found the owner.
Email Post