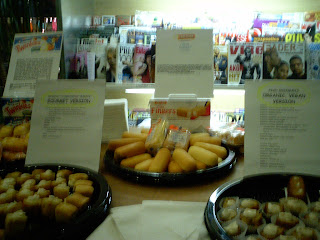 Fran Costigan made vegan Twinkies, Gramercy Tavern also made a version which were preferred by the under 4 foot set, and there were the real Twinkies, which were practically licked off the plates. I, of course, didn’t indulge because there was no gluten-free version. I still think vegan should somehow mean GF but it really doesn’t. [And sometimes, like today, I think this blog may cover the stuff I don’t do/eat as much as it covers what I do do/eat…]

Lo, it turned into a minor media frenzy: Nightline was there filming, Huffington Post and the New York Inquirer were milling about, Jim O’Connor from The Secret Life of on Food Network was in the crowd looking dashing [I mean really, he is so hot in person I couldn’t even say hello-sometimes extreme hotness renders me speechless].

What I've read of the book so far, now I'm up to the chapter on bleached white flour, is a bit like Fast Food Nation for the twinkie. Perhaps it may inspire a generation to put down the twink and pick up a carrot. One can dream.
Email Post
Labels: book review culture nyc