When I was growing up there was a funny corner health food store on Lexington on the Upper East Side. It was near school and it was called the Healthy Candle. It was owned/run by a tall guy with a long neck; he made fresh squeezed juices. No one in the store was under the age of 50, to wit, I once saw the actress who played Mary Hartman buying a juice looking, well, way past the braids stage.

Just what I was doing in there in High School I couldn't tell you; maybe I was getting a fresh squeezed carrot juice. Given that it's all the rage now to eat well and yogacize, it's funny to remember that it wasn't like a mere 15 years ago. Back in the day, none of the cute girls were doing yoga religiously nor eating that healthfully. None except Amy Ippoliti who was cute and both vegan and yoga-ing--in High School, in the 80s! Take that kind of dedication and forward thinking, add 15 years and Amy is now one of the top yogis in the country. If you ever get a chance take a class with her, do; she’s wonderful.

Back to the tall guy: he closed that store over a decade ago and re-opened on 3rd avenue as a full-fledged veggie restaurant called Candle Café. I went there a few times in the early 90s but didn’t love it. They then opened Candle 79 in the old Trois Jean space [I think]—a higher end veggie resto. I’ve been there once or twice, found the food a little too nutty for me and haven’t been a regular. [although they do have a gluten-free menu for those celiacs out there].

But recently, I’ve rediscovered Candle Café. On those rare occasions when I’m on the Upper East Side I need a healthy alternative to the Mezzaluna's, Megu's and Googies, this is it. And the rediscovery had led to some serious liking. I usually order the mix four platter. 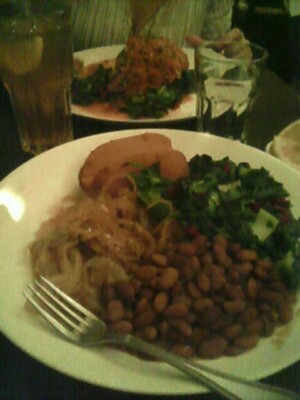 My four are: sautéed sweet onions, the bean of the day, a sweet potato and mixed greens as seen in the picture. It's all so delicious I can’t help but practically lick my plate! There are used to dietary restrictions so that’s not a problem and they label nut items appropriately.

Danielle and I went on Thursday night, after a visit to the American Comics exhibit at the Jewish Musuem. We liked the combo so much we decided to make a thing out of it—museum first, dinner after—fun fun fun!