The end of the property at 8am, looking toward downtown Miami. 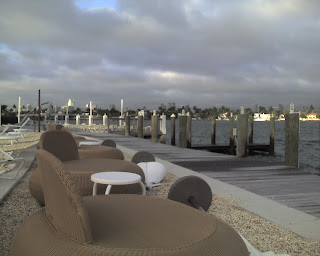 Looking toward the bay from the pool at dusk. 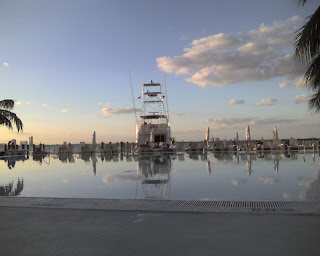 I stayed at The Standard, Miami once before in April 2006, a few months after they opened. It was still in the very soft opening stage and there were issues: parts of the spa were out of order; service was spotty when they showed up at all; the pool temperature was either too warm or off completely; and my room had a major caterpillar infestation.

Despite this, last year, I found a Chef who fed me safely, bellmen/waiters/housekeeping who were lovely and I was able to broker a truce between the caterpillar hoard and me.

And to top it off, I fell in love with the hotel with all of its charm and quirks.

Set off the main South Beach drag and tucked away on one of the many small islands in Biscayne Bay, the former Lido was transformed two years ago by the Andre Balazs group into its current state.

The vision for this hotel is a spa/hotel that utilizes water as a therapy/treatment. Hence, there are the three pools: the main pool, hot tub and Arctic plunge. Here's a view looking back toward the hotel from the pool: 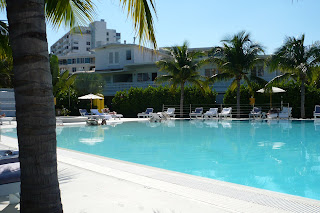 There is a spa in the main building with a Turkish style Hamam, eucalyptus steam room, large sauna, and a wall of sound shower [which, sadly, hasn't worked the two times I've stayed here].

The rooms are Scandinavian style, all blond wood and big white beds. There was a lack of shelf space but they've added Ikea roll-away drawers and some folding tables to compensate.

I wrote about the cuisine at The Lido earlier this week: it’s clean, flavorful, organic and local. And they do their best to make it allergic girl, allergic person friendly!

However, speaking of allergies: Balazs’ property is doggy friendly. They allow little dogs at this hotel, in the rooms and on the property. When I first stayed there last year, I thought “uh-oh” this might be a problem. I NEVER opt to stay at hotels that are doggy-friendly, just the opposite. But I took a chance here and I’m glad I did.

As I mentioned the rooms are sparsely decorated, no rugs, wood floors with cotton sheets [and a cotton coverlet for me, no feather duvet] washed regularly if requested. There’s air conditioning and the windows open so there’s ventilation. I was able to request a room where no doggy has stayed and they hotel was able to honor that request as they said they only allow dogs in certain rooms. I've never had an issue doggy-wise.

Overall, I think this is best deal in South Beach: it's serene, it's a spa and I can eat allergen-free!
Email Post

Anonymous said…
That's really cool that they keep the dog friendly rooms separate. I'm sure it's nice to be able to stay somewhere that isn't infested with dog hair. I however would be staying in the other part of the building, as I can't get away from the dog hair problem whether I bring the dog with or not.
7:10 PM, November 15, 2007

K Allrich said…
Your stay sounds lovely- and the photographs of the skies are gorgeous! (This post makes me aware of how much I miss the ocean.)

Allergic Girl® said…
dear apache--dog hair, cat hair, so problematic! and it travels! it's in the air, the furniture the carpets. and luckily this space is so sparsely decorated that that pesky animal hair/dander is greatly reduced.