Some general impressions: Newport is a charming hamlet: every inch of it is adorable; narrow streets are lined by darling houses; there's a salty breeze in the air; cars let each other pass with a wave; and the topper for this New York City Allergic Girl, people leave their front doors open. Why? Just 'cause. It's summer, it's hot, and they're neighborly.

New local friends Larry and Shelley [NYC transplants, natch] took us on an excellent mini-walking tour of their 'hood, called The Point. They told us that as Newport hasn’t experienced a major fire, like most American cities, many of its original structures still stand. Every second or third house we passed was protected and preserved by one of the three historical societies. Many of those sweet colonial cottages have plaques saying something like, "Colonel Mustard 1770". Larry and Shelley's office is housed in a converted school from the time of President Lincoln. So cool.

Then there are the major houses, the summer cottages used for only six weeks of the year by the great Robber Barons of the Gilded Age. We visited Marble House, pet project of Alva Vanderbilt. Here's her Chinese pagoda. 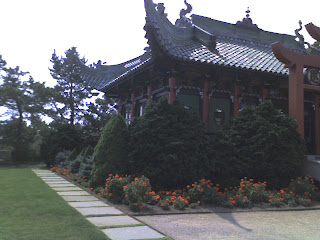 Rough Point, the Duke family estate and last occupied by the infamous Doris Duke. And The Breakers.

And not to mention, the great natural beauty: the ocean, the cliffs; greenery and flora. Oh joy. 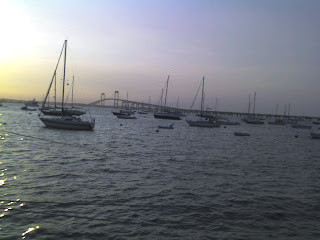 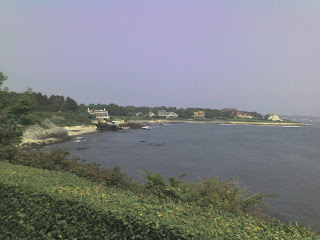 However, in some cities you can’t have it all and in Newport great food was just not in the cards for me. But eating relatively allergen-free was.

ChupieandJ'smama (Janeen) said…
Sounds like a lovely place! I've seen most of those places on the show "America's Castles" and have always wanted to visit there. I love old architecture and am fascinated by the gluttony of the robber barrons.
8:43 AM, August 29, 2007

Allergic Girl® said…
then you must must go. the houses were unbelievable.

but you can only take in so much at once. a native newporter recommended no more than 2 or 3 castles tops. so we chose carefully. and he was right.

Charles O'Rourke said…
Wow, I live here and no one ever lets me pass with a wave. Glad you had a good experience! If you come again, visit Chateau-sur-Mer and The Elms -- I think they're both way better than Marble House.
12:17 PM, August 29, 2007

no one lets you pass? maybe they saw my NYS plate and thought they ought to? ;-)