-I met Beth Nielsen, third generation of the Nielsen-Massey family- only the purveyor of the best vanilla extract. Aside from being delicious and organic for the last 11 years, the product is gluten-free. Love that. PS: did you know that almond extract isn’t actually almond? It’s made from the “oil of bitter almond” which in Nielsen-Massey’s case is actually peach pit. Now this I did not know. 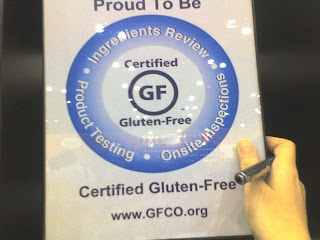 - King Arthur Flours had a great booth highlighting their new relationship with Jacques Torres in what else but chocolate goodies. I asked the rep if they had considered getting into the gluten-free market [I know odd question for a flour company but you never know]. And to my surprise he said they had been “thinking about it", as in thinking but no research and development yet. He mentioned that by show time next year they may have some initial offerings. Interesting.

-Stacey and I had a chat about her gourmet [from Israel] jams; organic and without sugar. I tried a yummy fig, cinnamon-y good. Did you know that Quince is grown locally in Israel? I didn’t.

-Here’s a new offering from Junior’s. Not anything I could try but it looked so outrageous I needed to take a pic: red-velvet cheesecake. Yes the red velvet is the cheesecake. Crazy! 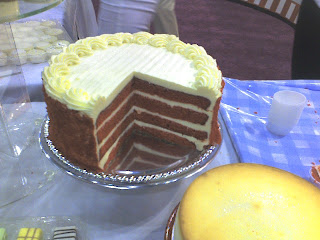